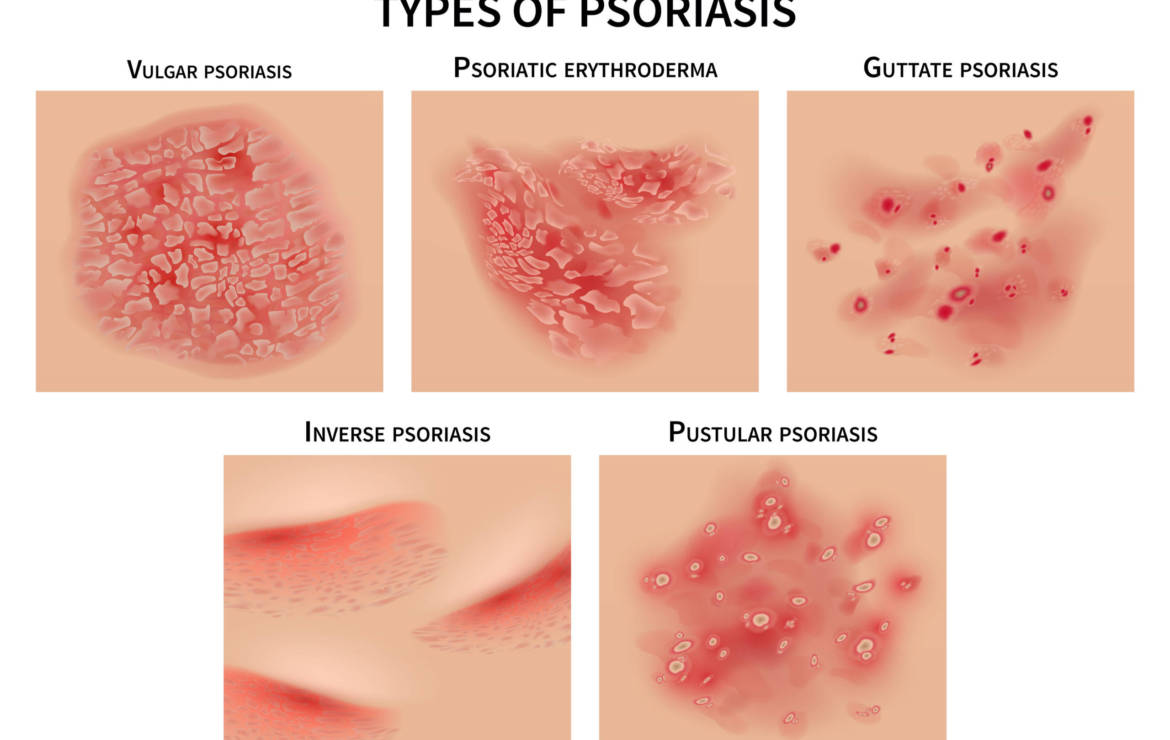 Psoriasis is an immune condition, which causes symptoms on the skin and sometimes the joints. When a person has psoriasis, their skin replacement process speeds up, taking just a few days to replace skin cells that usually take 21-28 days. This accumulation of skin cells builds up to form raised ‘plaques’ on the skin, which can also be flaky, scaly, red on Caucasian skin with darker patches on darker skin tones, and can also be  itchy. Psoriasis can occur on any area of the body, including the scalp, hands, feet and genitals, although different types tend to occur on different areas.

Most people with psoriasis have plaque psoriasis also known as vulgar psoriasis. This can be found anywhere on the body and also the scalp.  Pustular psoriasis presents as fluid-filled pustules which form on top of red or darkened skin. it is thought to be an autoimmune condition which appears to particularly affect the eccrine sweat glands; most of which are on the palms and soles.   Guttate psoriasis presents as a widespread rash of small spots, and occurs most often in children, teenagers and young adults. Inverse psoriasis, sometimes called hidden psoriasis or intertriginous psoriasis, is a form of psoriasis that affects skin folds.

The current thinking is that psoriasis affects an estimated 2% and 3% of the UK population – up to 1.8 million people. It affects males and females equally. Psoriasis can occur at any age, although there seem to be two ‘peaks’; from the late teens to early thirties, and between the ages of around 50 and 60. Some people with psoriasis may also get psoriatic arthritis – a type of arthritis associated with the skin condition.  However, just having psoriasis doesn’t mean you will get psoriatic arthritis, and not everybody who goes on to develop psoriatic arthritis necessarily has psoriasis of the skin, either.

Recent research has found that the psoriasis-causing changes in the skin begin in the immune system when certain immune cells (T cells) are triggered and become overactive. The T cells act as if they were fighting an infection or healing a wound, which leads to them producing inflammatory chemicals, again leading to the rapid growth of skin cells causing psoriatic plaques to form. You may therefore hear psoriasis being described as an “auto-immune disease” or “immune-mediated condition”. It is not yet clear what initially triggers the immune system to act in this way.

Some people will have a family history of the condition, but others may not. A flare-up of psoriasis can be triggered by a number of factors, such as stress or anxiety, injury to skin, hormonal changes, or certain infections or medications.

Psoriasis treatment usually starts with topical (applied to the skin) treatments, which can come in different formulations (creams, ointments, gels, etc) and have different active ingredients. These can be topical steroids, vitamin D based creams, coal tar shampoos especially for plaque psoriasis of the scalp or Dithranol

If topical treatments do not work your GP will refer you to a Dermatologist who may use targeted UV therapy or Systemic medicines. Systemic medicines affect the entire body (or ‘system’) rather than just targeting one area, as with topicals (creams and ointments) or UV therapy.

If you can’t have systemic medicines or they do not work Biologic medications may be prescribed. These are specifically designed to mimic chemicals that are naturally found within the human body, and act to correct something that is going wrong. A well-known biologic treatment (that is not used for psoriasis) is Insulin, which is taken by diabetics. For more information on treatments please see www.psoriasis-association.org.uk.

Some people believe that certain foods make their psoriasis worse or better and feel that they have improved their skin through diet. Following a healthy diet and lifestyle programme may help alongside structured stress management, exercise and a food plan considering allergenic foods.

Thank you for reading. Please do not take food supplements unless advised by a trained health professional.