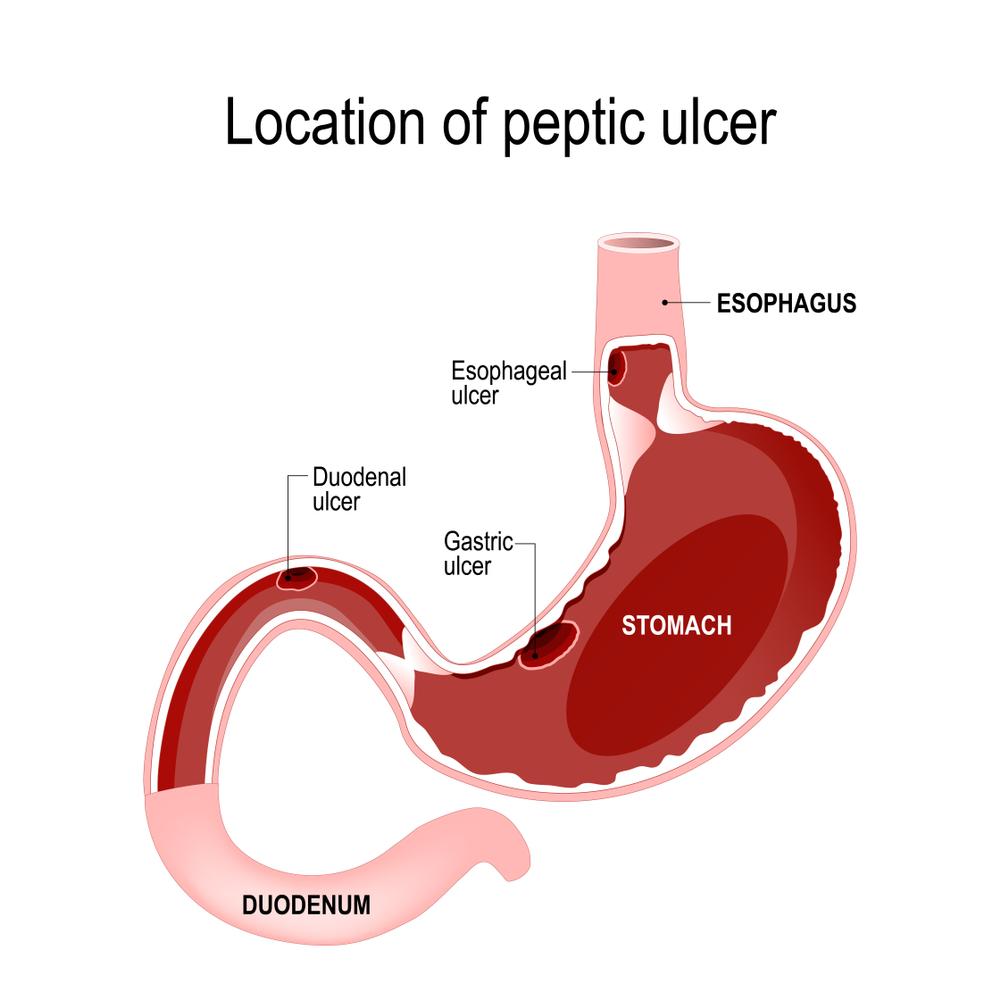 Stomach ulcers, also known as gastric ulcers, are open sores that develop on the lining of the stomach. There are a few different types depending on locations. Duodenal ulcers: ulcers that develop in the upper section of the small intestines, called the duodenum, Oesophageal ulcers: develop inside the oesophagus and gastric ulcers that develop in the stomach lining. All of these are sometimes referred to as peptic ulcers. In this article the term stomach ulcer will be used, although the information applies equally to duodenal, gastric and oesophageal ulcers.

The most common symptom of a stomach ulcer is a burning or gnawing pain in the centre of the tummy (abdomen). But stomach ulcers aren’t always painful, and some people may experience other symptoms, such as indigestion, heartburn and feeling sick. It is important to visit your GP if you think you may have a stomach ulcer.

What causes a stomach ulcer?

This is usually a result of:

It used to be thought that stomach ulcers may be caused by certain lifestyle factors, such as spicy foods, stress and alcohol. Emotional stress has been shown to increase acid production in the stomach. The reported association between stress and peptic ulcer might be attributable to a stress-induced increase in gastric acidity. There’s little hard evidence to confirm that this is the case, but these factors may make the symptoms of ulcers worse. But it’s thought that smoking increases your risk of developing stomach ulcers and may make treatment less effective.

With treatment, most stomach ulcers will heal within a month or two. The treatment recommended for you will depend on what caused the ulcer. Most people will be prescribed a medication called a proton pump inhibitor (PPI) to reduce the amount of acid their stomach produces and allow the ulcer to heal naturally. If an H. pylori infection is responsible for the ulcers, antibiotics will also be used to kill the bacteria, which should prevent the ulcer coming back. If the ulcers are caused by the use of NSAIDs, PPIs are usually prescribed and your doctor will discuss whether you should keep using NSAIDs. Alternative medication to NSAIDs, such as paracetamol, may be recommended.

Fibre slows the movement of food and acidic fluid from the stomach to the intestines, which should help those with duodenal, though not stomach ulcers. Salt is a stomach and intestinal irritant. Higher intakes of salt have been linked to higher risk of stomach (though not duodenal) ulcer. Sugar has also been reported to increase stomach acidity, which could aggravate ulcer symptoms.

Identifying food allergies or intolerances may also help. The relationship between food allergies and peptic ulcers has been reported at least as far back as the 1930s. Exposing the lining of the stomach to foods to which a person is allergic has been reported to cause bleeding in the stomach. Although additional research is needed, avoiding food allergens may be helpful for people with peptic ulcers. Consult with a doctor or health professional to determine food sensitivities.

Thank you for reading